The U18M European Championship, an event countries can count on

At the end of last year’s U18M Euro, some people warned us “the hardest thing is not to create an event, it is to maintain it. The ‘second time’ is always more difficult”. CERILH worked on this U18M project having in mind that it wouldn’t be an easy one.

We were at the limit of cancelling this event. Firstly, we faced the withdraw of one country, which had gave its oral agreement to host this event. Secondly, we were counting only 4 registered teams, when CERS rules request a minimum of 5 teams, to be able to set up an official European Championship.

CERILH has found solutions, on the first point with Roana, which accepted to host this event after a tiring and challenging World Championship to organize, with 4 categories. At Roana, people are passionate with sports and hockey and they are not afraid of taking risks, in order to make things done. We are thinking about Angelo Roffo and Fabio Forte, who did everything to be able to host the event, despite of the context. Thank you Angelo & Fabio for what you made.

CERILH found also an innovative solution in order to get a 5th team to register. We decided to create a “development fund” to help financially a team to participate. This fund has been exposed to 4 countries and finally attributed to Sweden. This fund, in our opinion, is something CERILH will try to propose each year, as a tool to help a new country, which is interested in participating to our movement, to come despite of difficulties. 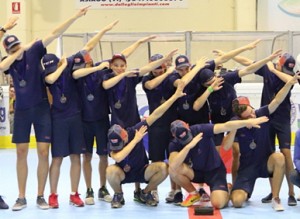 Last year, U18M was a creation, we are now convinced that we have installed a recurring event. U18M European Championship is an event that the european countries can count on, on a yearly basis. We are doing those things having in mind that we are learning and we are in an attitude to improve, ourselves, what we can propose, what we can do. This second edition gave us the possibility to try new things, to extend our network, get new ideas, convinced new people that will follow us in the future. So, we hope to see you next year, for other emotions, passions and great shows.

We didn’t find any better idea than giving the voice to team coaches, those technicians of our sport that put so much effort to build teams et who give their confidence to players, in order to always propose the best. We will let them conclude U18M European Championship – Roana 2016. Thank you everybody.

Eric Perraudin, Head Coach Team France
For this second edition of the U18M European Championship, the level was very high. Great teams,  good players and almost perfect organization.  A competition format adapted to this category with 5 games in 3 days,  overtimes,  penalty shoots… Thank you to Fabio and all the volunteers for the organization and Boris Darlet to ensure that our young players can live such sport’s confrontation.

Riccardo Marobin, Head Coach Team Italy
We have created a fantastic group. We believed in our success until the end, and were convinced that we could close this European championship with the gold around our neck. The boys would have deserved it, especially our goalkeeper Michele Frigo. We have so many guys in the team class 2000/01 so I think that the good work done this year will be useful in the future. France has once again shown great determination. We will work to be better and get this gold medal in next years.

Martin Mecera, Head Coach Team Czech Republic
As a first time in my career I was coach of U18 category on the Euro Championship in Roana. With so many expierences with seniors, l was very impressed by the quality of games, tactics and player’s skills, which we had been faced around all participated nations. Organisation was on a high level, which is  standard since last years, under leadership of Fabio Forte and supervisory of Boris Darlet. The tournament system with overtime and penalties is something, what make all games attractive for players and for spectators as well. Czech inline hockey association is very happy and satisfied to participate and support this events, which helps the significant level’s growth of our young guys and helps to make this great sport more popular.

Michael Friedli, Head Coach Team Switzerland
It was a great pleasure being back to Roana for the third time within one year knowing that the organziers will do an awesome job making the European Championship a memorable expirience for our young players.
Thank you CERILH, thank you Fabio Forte and everybody involed in the organization!
We have a shortage of youth teams and players in Switzerland which makes it always difficult to form a competitive team for such an event. We had our up and downs in the games throughout the tournament and finally couldn’t take home a medal. We knew from the beginning that our team is very young and physically not quite on the level of the others but I am proud of every player in the team for his commitment to never give up no matter what result the scoreboard shows. I think they proved that they followed this allegation coming back in the game against CZE being down by 2 goals in the last couple of minutes and finally winning in penalty shoot-out. As well as in the bronze medal game being down by 4 but scoring in the last minute the consolation goal are good signs for a working team spirit.
Everybody enjoyed the three days in Italy meeting other players from other countries and making some new friends!

John Redinger, Head Coach Team Sweden
It was a great event , well organized at a good location. I was suprised at the high level of inline hockey that were played and next year team Sweden will come with 12 skaters and 2 goalies and compete for medals. Thanks for having us. Best wishes