France has defeat hosting country Italy in final of the U18M European Championship in Roana (Italy). France has overturned the score falling from 0-2 to 2-2, finding lucidity to pick up the score and win in overtime with Clergé Réa (3-2). 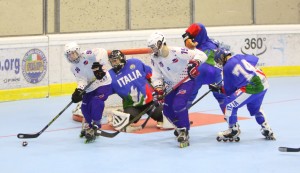 GOLD MEDAL. Italy takes the lead of this final, with conviction and the right determination. Captain Cantele will show the path to its team, by scoring two lovely goals by helped by its teammates, the first at 7’17” with the assistance of Charcoal and the second one at 17’11” assisted by Zorzo. France reacts just before the half time, at a good moment by Clergé Réa, author of an excellent race. In the second period, the two teams compete equally up to 12’57” when Farmer counterattack make the equalization, 2-2. At 4′ close to the end of the game, referees call a penalty for France; the Blues are desperate to find a conclusion so close to the money time, but nothing’s done. Manganelli causes difficulties for the Marobin team’s coach at 18’16’’ by a fault on Clergé Réa; the player beyond the Alps comes limping while Italy is preparing two minutes outnumbered. Chills for the Blues until 20” and Frigo who had to deal with the impossible. Game goes then to overtime, where after 48 ” Clergé Réa scores the goal that is worth gold and off the hopes of Cantele and his companions. Eric Perraudin and Bernard Seguy’s boys exploded with joy and celebrated this title, which also saw Clergy Rea receive the “best player of the tournament” trophy. Frigo Italian Goalkeeper was receiving at the same time the trophy for best goalkeeper.

THE RACE FOR THE BRONZE. The match for third place was opposing Switzerland (who lost their morning game against winning team France and get the 3rd place of the preliminary phase) and Czech Republic (who won in the morning against Sweden and get the 4th place of the Preliminary phase). The first goalkeeper Matter injured on the shoulder in the morning match against France, Bourquin was called to take the position. The game opens with the Czechs who are the first to score at 4’47” with Martinek. Also in the first period, two other goals are scored: to 7’27 ” and 10’44 ” respectively Martinek and Matiasko. In the second half the Czech Republic is the fourth mark in 15’47” even with Martinek, hat-trick for him. The goal of the flag for Swiss Muller is at 18’33”. bronze medal, then, for the Czech Republic, but Switzerland, devoid of its first goalie, has nothing to reproach himself. Martinek received the trophy of “Point Leader” while goalkeeper Matter has been awarded of the rare trophy of “Fair-Play”, for its behavior consisting in telling to referee Frederico Stella that the puck passed the line, allowing the referee to validate a goal he didn’t see. 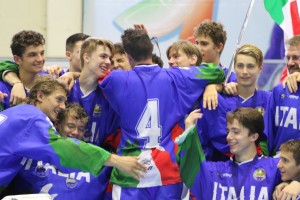 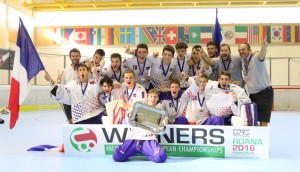 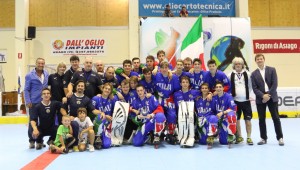