Here come the italian “azzurre” for the European Championship at Roana. After the last meeting of the team under the command of Marobin-Cintori duo, the Italian team is ready to face the second edition of the European Championships of inline hockey under-18 men, scheduled from Friday 26 to Sunday 28 August to PalaRobaan. The event, organized by Angelo Roffo under the aegis of Cerilh (Comité Européen de Roller In Line Hockey), the CERS (Comité Europeene de Roller Skating) and FIHP (Italian Hockey and Skating Federation), will see, on track, five high level national teams: Czech Republic, France, Italy, Switzerland and newcomer Sweden. It starts on Friday 26th with the Azzurrini led by Gianluca Cantele that will debut at 14 against Switzerland. Finals Sunday 28th with the race for the bronze at 14 and that for gold to 15.30; followed by the closing ceremony. 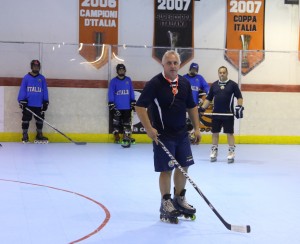 “It’s never easy to make the final choices – are the words of coach Riccardo Marobin, joined on the bench by Alessandro Cintori -. We got there at the end of a great work that has seen us engaged not only with athletic tests and track, but also with a lot of video sessions to cover training with lucidity. As for the goal of this European, also saw the great silver at the World Junior National, he is obviously winning. I see very focused team, so I’m confident. ”

“We are honored that CERILH chose Roana again as the location reserved for U18 European Championships – explains Fabio Forte, Coordinator of the technical sector -. It is a clear sign of confidence in our organizational skills, already tested in the European Championship last year and confirmed in the World of June. Obviously we will do our best as organizers to repay the faith and to achieve, such as Italy, another prestigious result to add to the “Philoctetes” of medals our athletes have deservedly put the neck during the world championship exhibitions “.

All games will be played at PalaRobaan (in via Laghetto, 51 – Roana) with daily entrance fee 5 euro. You can see the races live streaming on the site dedicated www.roanaroller.com the daily cost of 4.49 euro. For more information, you may refer to the Facebook page “Cers Euro 2016”.